Not every country has a museum devoted specifically to music even though many museums may have a musical collection. In this series of posts, I highlight the Music in Museums and identify the role given to the cultural form. In this post: Museo de Arte Popular in Mexico City

The Museum of Popular Art opened in 2006 in the old Fire House in the historic centre of Mexico City. The museum aims at becoming a reference point of popular art from Mexico while ensuring its valuation for national and international constituents. The collections showcase the skills of nearly 8 million artisans from different regions of the country. The focus is on objects of high artistic quality. The permanent collection is made of 3,000 objects including wood, masks, paintings, textiles, glass, natural fibres, metals, and ceramics, all originating from various individual and institutional donors. The museum has increasingly been known for its yearly alebrije competition and parade (the new versions are mechanic and have internal lights !). One important element of the museum are the workshops for children, for adults, and for professional artisans who want to share or improve their popular art-making skills.

“Many museums that we visit today present objects that originally were used in daily life and that gained value in time through aesthetic, manufacturing, and the art market […] Objects acquire value from our admiration and appreciation of their survival in time ” (Walther Boelsterly, translation for this blog)

A museum of popular art was an idea born in the 1920s to recognise the aesthetic, historic and cultural value of traditional objects found in daily life, sometimes used as decoration but often serving their intended use. A group of artists identified the need to collect and preserve such testimony of Mexican identity but it was not until 1934 that Roberto Montenegro dedicated a room for popular art in the newly open Palacio de Bellas Artes. Private entities have contributed to the effort and have collected and preserved popular art, such as Carlota Mapelli’s textile collection (400 objects), the Fomento Cultural Banamex’s collection, and Grupo Savia’s collection (1,200 objects), collections which would become part of the Museo de Arte Popular. In the 1990s, Populart was formed as non-profit association, headed by Teresa Pomar, and became the driving force to create the current Museo de Arte Popular (Monges and Davidoff, 2019). Other individual and institutional private collections will later join the museum, including Marie Thérèse Hermand’s collection, Group Plenus’ collection, Hermand Arango’s collection, Rivero Lake’s collection, Occelli’s collection, Tapuach collection, Esponosa’s collection, and Fosado’s collection of miniatures which are included later in this post.

Popular art in Mexico has relative low value due to its great production and its easy acquisition. Historic collections of artisans work are extremely rare and a resale market is practically inexistent. However, these objects have become fashionable and collectors competition can lead to overpricing (Boelsterly, 2019). Clearly, the museum includes unique collector’s items.

The collections are organised in four topics: (1) the essence, which provides a general overview on the relation between popular art, nature, the past, and the present; (2) daily life, in which popular art is presented as examples of objects from daily life (look at any kitchen, clothes or children’s toys in Mexico); (3) the sacred, in which the the multicultural philosophy of life is evidenced by the juxtaposition of catholic elements and local ancient rituals, giving a rich symbolic vocabulary for the sacred; and (4) the fantastic, as synthesis of the historic knowledge visible in the originality of the pieces which appear to escape any regulatory temporality. Below a great example of (1) traditional paint on papel amate (bark paper) displaying a musical band using modern technology to increase musical reach, in which nature, history and popular art converge.

You can hear Claudia Nuncio Diaz, head of the documentation and research of the collections, in this video (in Spanish). She notes that 12% of the global biota is found in Mexico, for which is no surprise to find such rich and varied artistic expressions in the different regions (north, centre, and south east). Popular art responds to its environment: its biodiversity and its social context.

The music collections took my attention. A large wall displays a series of miniatures with various musical groups: brass, drums, strings (including harp), voice, and even dancers. In popular music, dancers can be considered part of the musicians as they display intricate rhythmic compositions with their feet (zapateado) on a wood structure (tarima). Above you can see an excellent photo of the delicate wood miniature collection of strings found in the museum’s Wikipedia page (by Alejandro Linares). Below you can see my photos of a selection of bands made out of painted clay. Others were made out of wood, glass and cloth. Some even had wings. 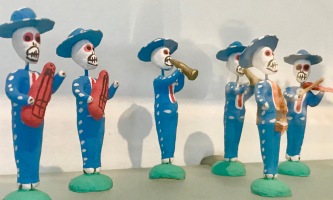 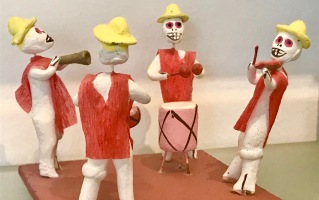 Miniatures have been a craft speciality all over the world, in Mexico the tradition has a 500 year history found in jewellery, toys and fantastic figures. The label reads: miniatures showcase ‘patience and mastery of the artisan, as well as his skill in using the materials’.

The chronicle of the 16th Century told that it was the obligation for those responsible of the well being of a newborn to put in the baby’s hands, within two or three days of birth, minuscule objects that represented the trade and activities to which he would dedicate his life.

Noticeable for some may be the presence of skulls, for us Mexicans we are taught to joke about death, it is a whimsical way to understand the value of life. You can hear the skull above laughing out loud, can you not? Some miniatures were quite suggestive and abstract. 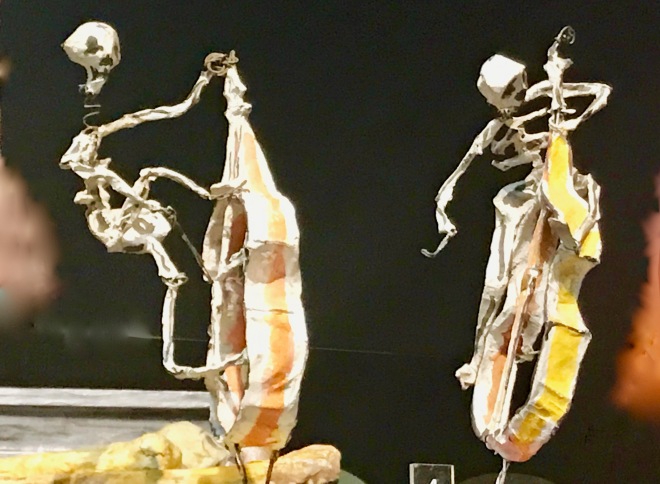 Below a detail of ‘Enramada de Juchitán’ by Ezequiel Negrete Lira (1957), displaying some of the traditional dance, song, and music during a popular festivity in the south of the country (Oaxaca). 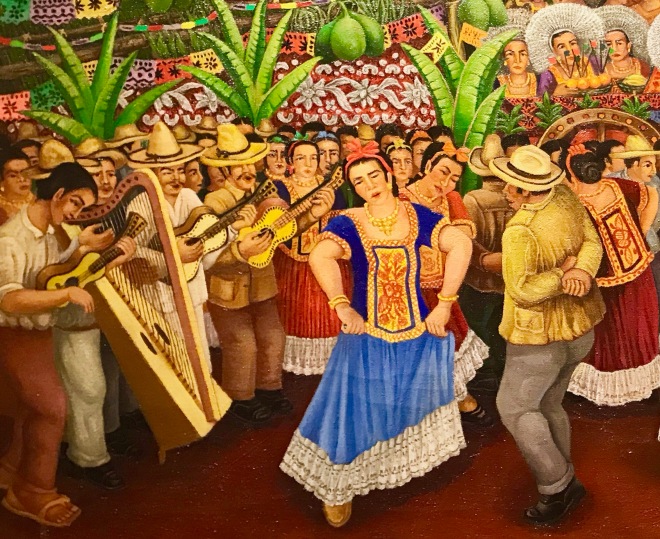 As noted, the bio diversity is visible in the popular arts. Below an example from the north. On the left the entire outfit for the ‘Dance of the Deer’ from the May group (Filiberto Barndón Ruiz y Ejido Rincón Aliso from Sinaloa) made out of deer leather, wood, ribbon and butterfly. On the right you can see the incredible Huichol guitar made by Familia Hernández from Jalisco out of carved wood and decorated with chaquira (glass beads). In between you see a selection of strings (guitar, violin and jarana, various artists) as well as a fantastic temponaztle (drum) by Juan Suárez Terán from Guanajuato in the shape of an animal. 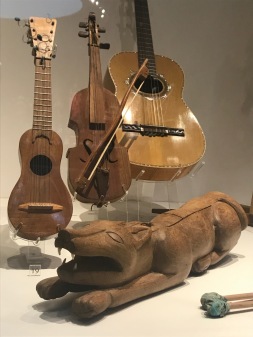 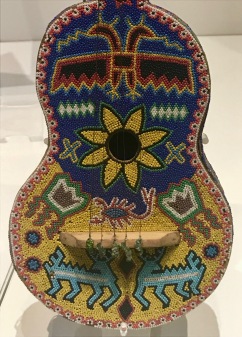 Unfortunately, there was no sound to accompany the instruments or the musical iconography. Only one video, near the end, looped a few seconds to show the artist and his instrument making evident that popular art is gorgeous to look at -specially the selection available at the museum, but is meant to be used in life. I will have to inquire about music making workshops next time I visit. 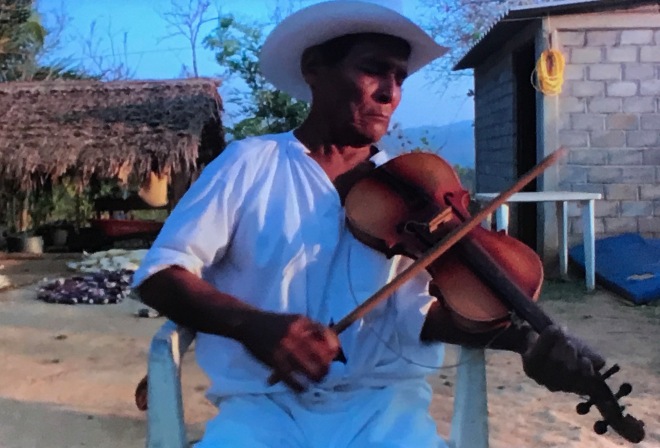 Surprisingly, the museum’s official website is very limited and offers no images of the collection. Instead, the collection is available via social media in the Instagram profile, the Twitter profile, and the YouTube profile of the museum. A good share of museums around the world have an online presence defined by a strict institutional structure, often linked to the government, that moves much slower than museums would want, so social media provides a welcomed channel to communicate with the public. The Museum of Popular art is equally financed by the Friends of the Museum Association, by the federal government, and by the City of Mexico.

This entry was edited to include additional information from sources provided by the museum, including the newly published two-volume catalogue of the collection. With thanks to Maria de los Angeles López, head of educational services.