Exhibiting music highlights the challenge of presenting the intangible, through tangible and digital objects, with fragmented collections. In this post I explore these topics as experienced in various Museums of Music across the world while arguing that music can help close the gap between culture and heritage. In this post: Bologna.

The museum is located in the Palazzo Sanguinetti, donated by Eleonora Sanguinetti in 1986 and restored by the government to open in 2004. The museum and library are part of the University of Bologna linked to the Conservatorio di musica G.B. Marini. A part of the exhibit rotates periodically and another section includes thematic exhibits planned by the scientific committee. The origins of the collection can be traced to the mid-1700s when Giovanni Battista Martini, composer and music theoretician, decided that music had to be understood holistically. He initiated a comprehensive collection to include sheet music, but also other musical documents, instruments, and portraits of notable musicians. You can see them all at the Portrait Gallery, including Johann Christian Bach (son of Johann Sebastian),  Carlo Broschi (known as Il Farinelli), and Maria Alboni (a contralto opera singer). To read more about them, you may want to look at the Wikipedia articles of Marietta Alboni,  Farinelli and Johann Christian Bach, where a copy of the portrait made by Thomas Gainsborough serves as main illustration.

The most impressive part of the museum, for me during my first visit, was the magnificent documents on display. Sheet music from different periods, authors, and printers, can say a lot about the piece, its period, and the context of its creation. Below a few gorgeous examples. You can see many more at the Library collection. 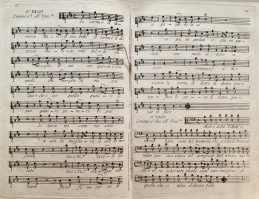 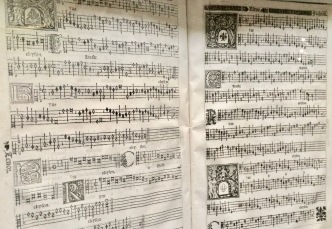 Padre Giambattista Martini, a Franciscan monk, “initiated the most extraordinary collection of books and music ever assembled by a single person, an authentic bibliotheca universalis of all musical knowledge.” The collection of Martini eventually resulted in his Storia della Musica, a handbook that covers a large number of topics and has a comprehensive bibliography.

Every book purchase comes with a story… El Melopeo y Maestro by Pedro Cerone (156-1625) – a music treatise in Castilian printed in Naples in 1613 – very quickly became a rare book, because apparently the entire print run sank with the galleon that was transporting it to Spain. Martini looked for the treatise everywhere from 1736 [until he] found it in 1752.

The library has many objects digitised and available online, including the rare book by Pedro Cerone, see below. You can view the entire piece. A delight ! In 1750, Martini got pope Benedict XIV to threaten excommunication to anyone who tried to damage the integrity of the collection. However, Napoleon occupied Bologna in 1796, and for 100 years the collection survived periods of dispersion, neglect, incompetency, and bureaucracy (many documents have been lost, including Martini’s letters from Gluck and Mozart). In 1856, the city of Bologna appointed a librarian with musical knowledge to care for the collection and a first catalogue was soon after published.

There is also the Instrument collection. You can just look at them all – but you may have to find an Italian dictionary to find the right search words… I managed to search for a ‘liuto’ and found this unique instrument by Hans Frei, a 1590s tenor lute from Bologna. All objects are photographed from front, back, and side. The catalogue entry includes also images before restoration and images in publications. 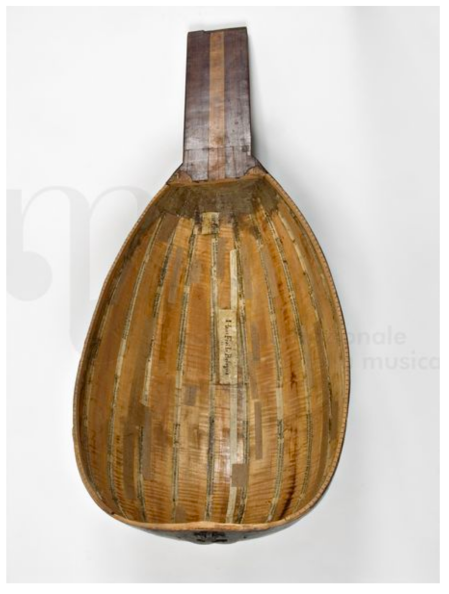 The museum has a large collection of objects, part of which are from beyond Europe probably donated by Bolognese diplomats active in various remote parts of the world, including Tangier, Cairo, Shanghai, and India. Some instruments are on display, though I most vividly remember the incredible document collection.

Music in the International museum and library of music of Bologna is clearly tangible, I am greatly impressed that so much of it is digitally available online. Martini’s initial holistic approach to collect sheet music, documents, portraits, and instruments in his effort to transfer the intangible musical knowledge, remains clearly visible to this day.